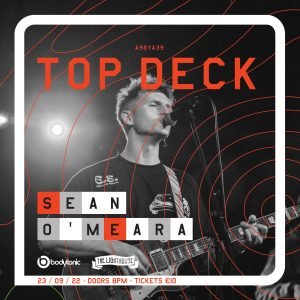 Sean O’Meara is a musician & songwriter from Limerick, Ireland. In such a short period of time, he has racked up musical CV that any musician would be proud of. Seán did his first tour when he was 16 and has been a multi-genre touring musician and recording artist since. His background is rooted in rock, pop and traditional Irish music and since winning the All-Ireland Fleadh in 2012, has gone on to gig and tour all over the world. Seán has played in over 20 countries across 5 continents with various bands and shows. Some of the names he’s performed for and shared the stage with include the president of Ireland, Michael D Higgins, Cory Wong, David Gray, Hermitage Green, Denise Chaila, Martin Hayes, Ralph Mc Tell Damien Mullane, Sting (The Police) and Zucherro . Seán currently tours with The Olllam while he continues to write and produce his own material. Seán has been writing and producing music for the last number of years and released his first original songs in 2019; Blew MY Cover in April, Lost in July and Talkin’ About Love in September. His latest song, was released during the lockdown in April 2020. Seán’s sound has been described as an original, unique, quality production.